After four days of waiting, Blizzard finally issued a statement regarding the Hong Kong controversy, and it’s ringing hollow for a lot of fans. I can’t really blame them either. Blizzard’s response is rife with PR buzzwords, it lacks any real apology, and it outright lies to the reader.

So let’s dive right in. How did Blizzard respond to the growing controversy? Why aren’t people buying it? Where do we go from here? Well, let’s take a look!

On October 8th, Blizzard banned pro-Hearthstone player “Blitzchung” for one year and confiscated his price money for saying “Liberate Hong Kong” during an interview. They also fired the interviewers for some reason.

Overnight, hashtags like #BlizzardBoycott, #FreeBlitzchung, and #BlizzardIsCancelled began trending. Many of Blizzard’s developers staged a protest in response. One of the original WORLD OF WARCRAFT designers canceled his subscription in disgust. In the meantime, one of Blizzard’s most famous characters has become an ironic symbol of the Hong Kong protests.

In a brief statement, Blizzard cited a clause in their rulebook stating that they have the right to ban any player for behaving in a way that could damage their image.  This kind of vague rule is used by plenty of companies, and it’s completely up to them how and when they enforce it.

For more, check out our PixelPop News article on the topic.

After several days of deafening silence, Blizzard finally released an “apology” for their actions. Here it is, in full. 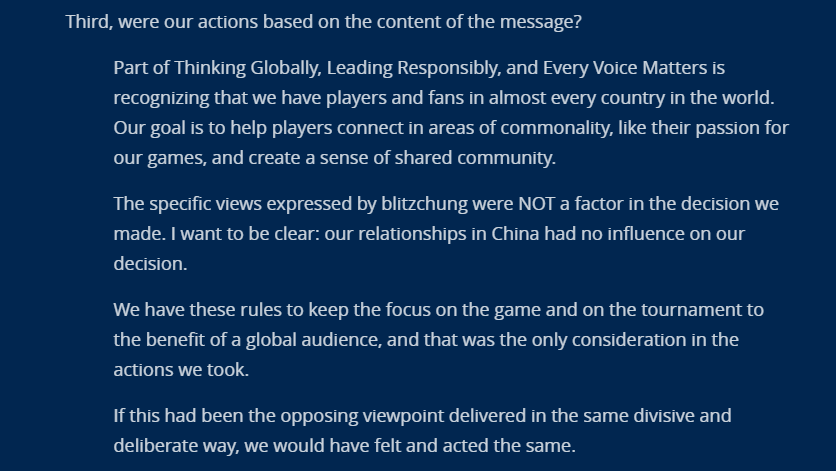 This section is particularly ridiculous, but we’ll get to that. Image courtesy of Blizzard.

Big surprise: this did little to quell the growing anger from the community. Many saw Blizzard’s statement as logically flawed and disingenuous. At best, it’s a fumbled response made in a state of panic. At worst, they’re being deliberately deceptive.

Sure, they reduced Blitzchung’s ban to 6 months and returned his prize money, but at this point, the ban is just the tip of the ice burg. Maybe that would’ve worked if they had acted immediately, but consumers have had four days to think about the scope and context of Blizzard’s actions.

Do me a favor. When Blizzard finally drops that sexy Diablo 4 trailer or Warcraft Mini-Golf MMO and you can’t help but go “ooooooooh,” please remember Hong Kong and China.

Not asking you to give up Blizzard games, but I’m asking you not to forget what has happened.

Fun fact: this is the disgruntled designer I mentioned earlier.

This last one brings up a good point because it exposes Blizzard’s blatant hypocrisy. They make a show of being socially aware and supportive so long as it makes them money and improves their public image. But the moment their “values” threaten their bottom line, they abandon them.

Sure, you can say that about most corporations, but it’s usually not this obvious. Don’t get me wrong: Blizzard has the right to act like spineless cowards, but if you’re going to take that stance (or lack thereof) don’t expect consumers to respect or trust you ever again.

But most ridiculous is their claim that this decision had nothing to do with their relationship with China. Now, I can’t read the mind of a billion-dollar company, but I can read their own words.

This is Blizzard’s statement on the matter, posted on the Chinese social media site Weibo. This statement came on the same day as Blitzchung was fired, days before we received any communication from Blizzard in English, which itself shows their priorities. 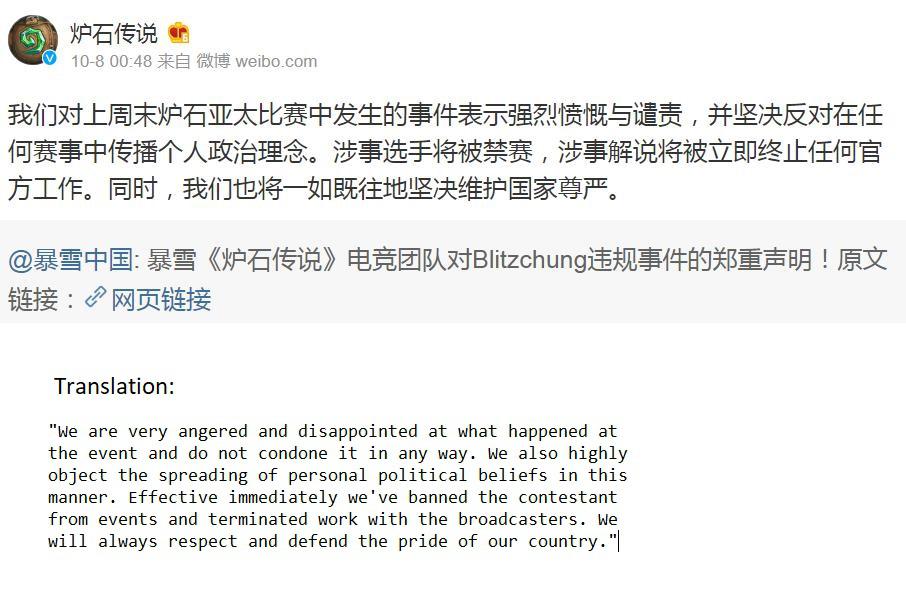 Yes, you read that right. Image courtesy of Blizzard via Weibo.

This is a rough translation, but the intent is clear: Blizzard is blatantly taking a side in this debate.

It’s worth noting that Blizzard’s Weibo account is operated by NetEase, a Chinese company. This is pretty normal for companies that want to operate in China. It’s also worth noting that, in this statement, NetEase is behaving as though they are Blizzard, or are at least parroting their words.

But let’s say, worst-case scenario, that NetEase went rogue and released this statement without Blizzard’s consent or knowledge. Blizzard had days to denounce, delete, or to just address this statement. Instead, they ignored it as if none of their fans were intelligent enough to find this on their own.

I could spend paragraphs dissecting each line of Blizzard’s response and breaking down all its problems, but that would just be a waste of your time. This blatant gaslighting is enough to write off the statement on its own. Blizzard is not being serious here, so we shouldn’t take them seriously.

I usually end these articles with some attempt at wisdom, some moral or nugget of truth we can all use to improve the industry.

I have nothing to offer a company that cowers to what is essentially an east-Asian Ingsoc. I’m not going to feign a lack of bias to appear more credible when the people I’d be defending have no credibility of their own.

Blizzard made a terrible decision. Their response is garbage, and unlike many gaming “scandals” I don’t think this one is going away.

And that’s all I have to say.