Creepy Music In Gaming For Halloween

October is upon us, and you know what that means! That’s right: it’s Halloween season! And what better way to celebrate Halloween than to look at creepy music in video games?

I have written before on music in video games and its importance in gaming. Just like with movies or TV, music can greatly enhance and enrich a game, both in terms of atmosphere and otherwise. However, I would argue that this is even more important in video games than in movies. To keep with the Halloween theme, this article will examine creepy music in gaming and how it works to enhance the gaming experience by raising your hairs.

Both in horror and non-horror games alike! In addition, this article will attempt to incorporate both creepy music that is well-known as well as lesser-known scary tunes. If you have some creepy music of your own that I have not included, feel free to leave it in the comments!

What Makes Creepy or Scary Music? 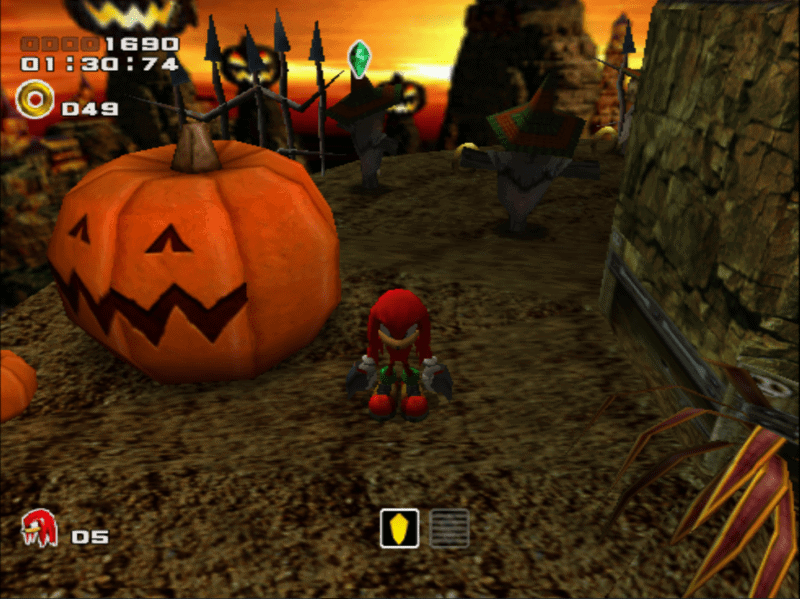 While festive for the season, Pumpkin Hill and its music is more catchy than scary (image courtesy of Mahou Tofu)

What makes video game music scary or creepy? Obviously, the answer here will be somewhat subjective. After all, what one may consider terrifying, another may consider not scary at all. But I believe there are some things that consistently work to create music that will make your skin crawl when you hear it. Keep in mind, there are different types of creepy/scary music. Fear is one of our most primal instincts, after all, and it manifests itself in all kinds of ways. This article will attempt to examine the different types of fear that video game music can elicit, with examples!

One of the more subtle ways of creating creepy or scary music is to make it unsettling. It’s not in-your-face jumpscare kind of scary, and it does not necessarily make you want to scream in terror. But at the same time, it cannot help but make your skin crawl. It puts you on edge, gives you goosebumps, makes you uncomfortable.

One of my favorite examples of this kind of music is in the video above. The song is Abominable Memory from FIRE EMBLEM: PATH OF RADIANCE, released for the Gamecube in 2005. Whenever I hear this creepy music, it cannot help but make me feel uneasy. The context of the song in-game does not help matters. In-game, it plays when Prince Reyson, one of the only survivors of a genocide, discovers that all that’s left of his homeland is a barren, charred wasteland. The context alone is bad enough. The creepy music causes it to go above and beyond in making it a truly unsettling experience.

Here is another, more (in)famous example:

That’s right. Lavender Town, the infamous theme from POKEMON RED/BLUE/YELLOW. Practically every one of my generation who grew up playing video games is all too familiar with this paragon of unsettling, creepy music. In-game, the music plays in, well, Lavender Town. This town has such creepy music (which is unique in the game) because it is where the Pokemon Tower is located.

Said tower is a Pokemon graveyard, containing the tombstones of many deceased Pokemon, as well as the ghost of a Pokemon killed by Team Rocket. It also has some creepy music of its own. Both themes crept the living daylights of seven-year-old me, to the point I could not advance in the game for months until I could muster up the nerve.

It goes to show how creepy music that is unsettling, while not as traditionally scary as you may find in some horror games/movies, can go a long way towards creating that kind of creepy atmosphere even in non-horror games.

Another way that video game music can be creepy/scary is how it can induce despair. While sadness isn’t necessarily the same thing as fear, often the two go hand in hand. This is seen no better than, in my view, one of the most harrowing tracks in video game history. I refer, of course, to the Final Hours theme from THE LEGEND OF ZELDA: MAJORA’S MASK. I have sung the praises of this track before and shall do so again. For it is arguably one of the greatest works of legendary video game composer Koji Kondo, which is no small feat.

As with many of the tracks listed in this article, while the song is still creepy music on its own, the context really helps to drive it home. This somber theme plays six in-game hours before the moon falls and ends the world. It supersedes any and all other background music except dungeon music, so that no matter where you go in the game, you cannot escape this reminder that you are out of time. Everything is made much worse by this despairingly creepy music. It makes you despair that (until the end of the game, at least) you are helpless to save these people, most of whom are all too aware of their impending demise.

One could argue that despair, or the feeling that all hope is lost, is the scariest emotion of all. As someone who has struggled with depression for a long time, few things make me more terrified than relapsing. And this music induces that most terrifying emotions on you. It’s a subtle way of creating scary music, but so very effective.

Of course, there is also the more “traditional” kind of creepy or scary music. Something more… sinister. Something that is unambiguously evil music that cannot help but make your hair stand on end. Music that you can just feel the malice emanating from. As an example of this kind of music, I give you the example of the Loptyr theme from FIRE EMBLEM: GENEALOGY OF THE HOLY WAR, one of my favorite games, in the video above.

In-game, the song is the theme of the loathsome Loptyrian Sect. Particularly its leader Archbishop Manfloy, the main antagonist of the game. Fitting that one of the vilest antagonists ever seen in a Nintendo game is graced with one of Nintendo’s most sinister themes. It is a very effective piece. Whenever you hear it in-game, you know that something horrible is about to happen. I would argue that it is malice given musical form.

It is a fine example of how to add creepy music to make an already-scary antagonist seem even more intimidating. Yet another reason I want to see this game remade and localized officially.

Wait, why are people boycotting BORDERLANDS 3? Companies are changing the way loot boxes work? If you're out of the loop on the biggest gaming stories, read the latest issue of PixelPop news!
Comments
Leave a reply