I gotta be honest: the last thing I wanted to do this week was play another zombie game. This industry is oversaturated with zombies. You can’t go five feet without stepping on the corpses of WALKING DEAD knockoffs.

So suffice to say, I wasn’t expecting to like DEADLY DAYS. Then I actually played, and all I can think about while writing this is when I’ll get to play it again.

DEADLY DAYS is a zombie survival rogue-lite game, with some light strategy and RPG elements. In other words, you fight zombies, get loot, and if you die, you start from the beginning. Each new game features new characters, new locations, and new powers.

But it’s hard to explain the sheer brilliance of this game in a few sentences. In many ways, DEADLY DAYS is a perfect rogue-lite experience. It also comes with a set of issues that keep it from being an all-time favorite.

Now, you’re probably wondering why this isn’t a full review. Well, this isn’t the kind of game you can beat in a weekend. I still haven’t seen the end of this game, and I prefer not to review things without getting the full experience. Instead, think of this as an analysis of my experience so far.

So what is DEADLY DAYS? Is it worth your time and money? Let’s take a look!

The premise for DEADLY DAYS is simple. The local burger factory kept their cows a little too close to their experimental zombie juice, turning anyone who eats their burgers into the living dead. You play as a group of survivors as you gear up to fight, stockpile food, and take back the town from the evil burger company.

In my experience, there’s two kinds of zombie games: the ones that take themselves seriously, and the ones that are “in on the joke”. DEADLY DAYS is definitely the latter. It immediately draws attention to its absurd premise with its cartoony art-style and ironically calm music.

Oh, and speaking of the music: holy crap is it good. It has this upbeat, retro vibe that really gives the game its own identity.

DEADLY DAYS — How It Plays

Before you start the game, you have to choose a playstyle. You can focus on combat, research, or scavenging. There’s also a secret playstyle that you unlock after beating the game. Each specialization comes with its own progression tree, which includes weapons, powers, and even characters.

The game is divided into days. Each day begins at your base, where you can level up randomly-generated characters, change load-outs, and research new abilities. When you’re done hanging out at the base, you have a choice between 3 missions. These are randomly generated and each has their own level of danger, loot, and special modifiers to really mix things up.

Sometimes you’ll find a hospital full of loot and food, surrounded by hordes of zombies. Other times you’ll find new survivors to add to your team with their own unique abilities. You get a hint of what to expect at the mission select screen but you never know exactly what you’re in for until you start the round.

Fight For Your Life

Once you drive to the location, the real game begins. You explore the map looking for food, supplies, and other surprises. But here’s where the twist comes in: you only have 2 minutes of daylight. Once the sun goes down, the zombies become faster, stronger, and more numerous.

But It doesn’t stop there. The longer you decide to stay and loot, the more dangerous it becomes. Eventually, the amount of zombies becomes ludicrous, and unless you have a perfect escape plan, you’re going to die.

If you manage to survive, a new day begins and the zombies are slightly more powerful than they were yesterday. This mechanic acts like a soft time limit. You need to stop this invasion before the zombies overpower you.

But death isn’t a complete loss. Like any good rogue-lite, every run gives you a sense of progress with permanent upgrades to your specialization. There’s also daily challenges: pre-made scenarios designed to give you a unique experience every day. 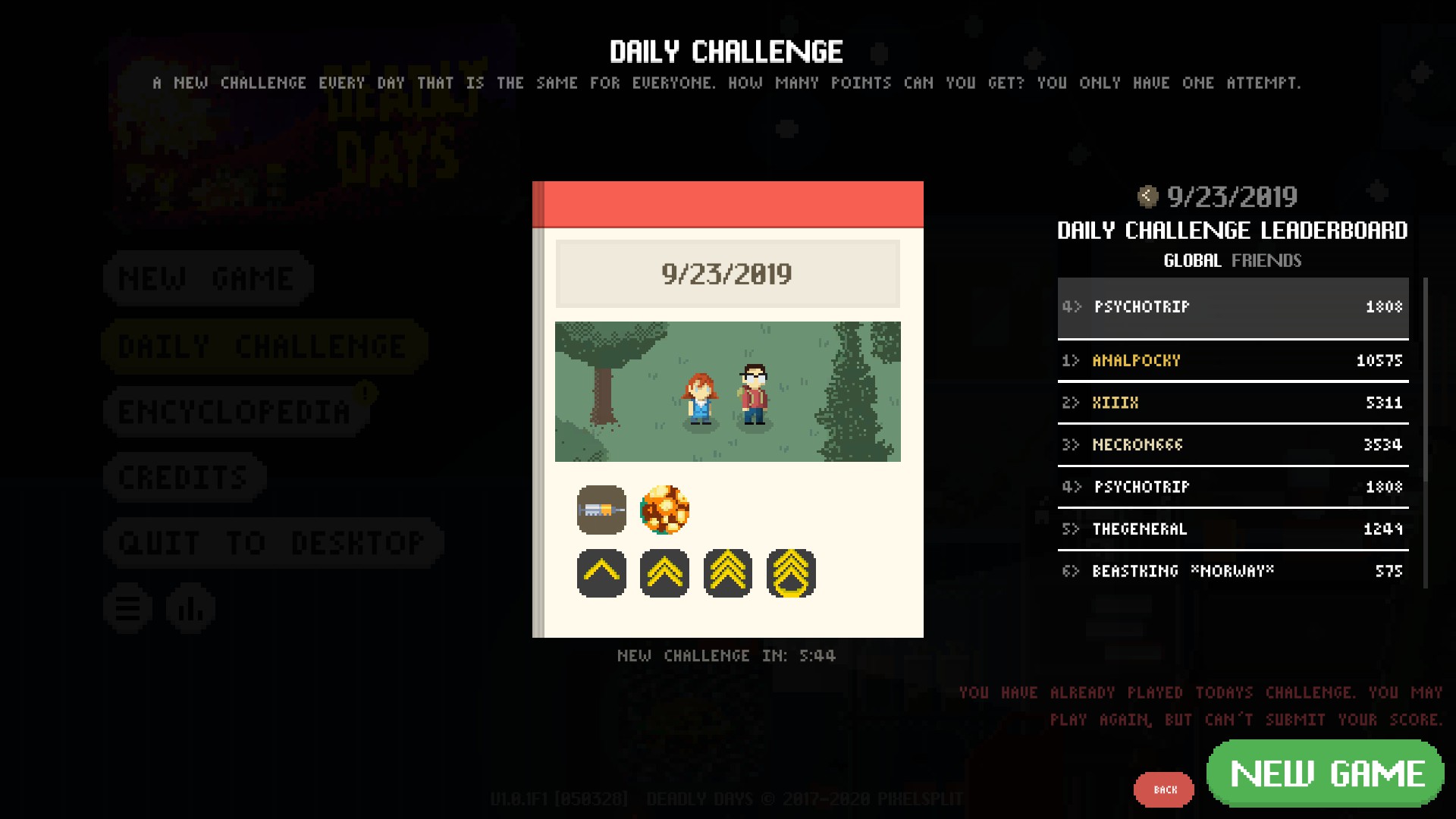 This “challenge” was a little easy but extremely fun. I almost beat the game with this one. (Image courtesy of Pixelsplit)

For me, half the fun of this game comes from its dynamic nature. People often criticize games for random-generation but when used well I think it can greatly enhance the experience. Everything from the weapons to the maps to the powers are completely randomized. This gives every playthrough its own unique story, and it makes the game endlessly replayable.

One of my first playthroughs featured the dynamic duo of Elizabeth Lee and Sandra Allen. Elizabeth is a medic, meaning she continuously heals the crew. Sandra is an “innocent”, which means that every time she levels up, the entire team gets fully healed. This encourages us to protect her, keeping her alive as long as possible.

This is the kind of game that encourages you to fill in the blanks and make your own little narrative. I decided that Sandra was an elementary schooler, and Elizabeth was her school nurse. As the last survivors of the school, these two ladies are on a mission to take down the burger company.

But don’t be fooled by the cartoonish atmosphere. This game is trying to kill you. DEADLY DAYS is a fast-paced, frantic experience. This isn’t SHAUN OF THE DEAD. You can’t just hunker down in a pub and expect the apocalypse to blow over. If you’re not playing this game like a manic looter, you’re going to die within minutes.

Every second counts. You need to minimize your time and maximize your actions. Once you get the hang of the gameplay, you’ll be making judicious use of the pause button to issue orders, prepare abilities, and scan the map for anything useful.

But it’s not all doom and gloom. Thankfully, the game gives you a boatload of special abilities to fight back against the darkness.

This is the highlight of the game. These powers add a level of complexity that I honestly wasn’t expecting. Many powers synergize with one another, and this is where the game really shines.

For example, my character Rebecca is an ammo supplier. That means she reloads all of her weapons much faster. I also found a power that reduces reload time for my whole team. This essentially turns Rebecca’s rocket launcher into an automatic weapon, capable of mowing down hundreds of zombies in a manner of seconds.

To make things even more interesting, I found a power that lets me refresh the cooldown of other powers. Now I can use my upgraded I.N.F.E.R.N.O twice in one round. This ability drops explosions at my location for what feels like 30 seconds. In a game where rounds last 2 to 3 minutes, this addition is a game-changer.

This is DEADLY DAYS in a nutshell. Every time you play you stumble upon a new set of powers, find ways to mix them together and take your team from a group of scared survivors to a squad of zombie killing commandos. 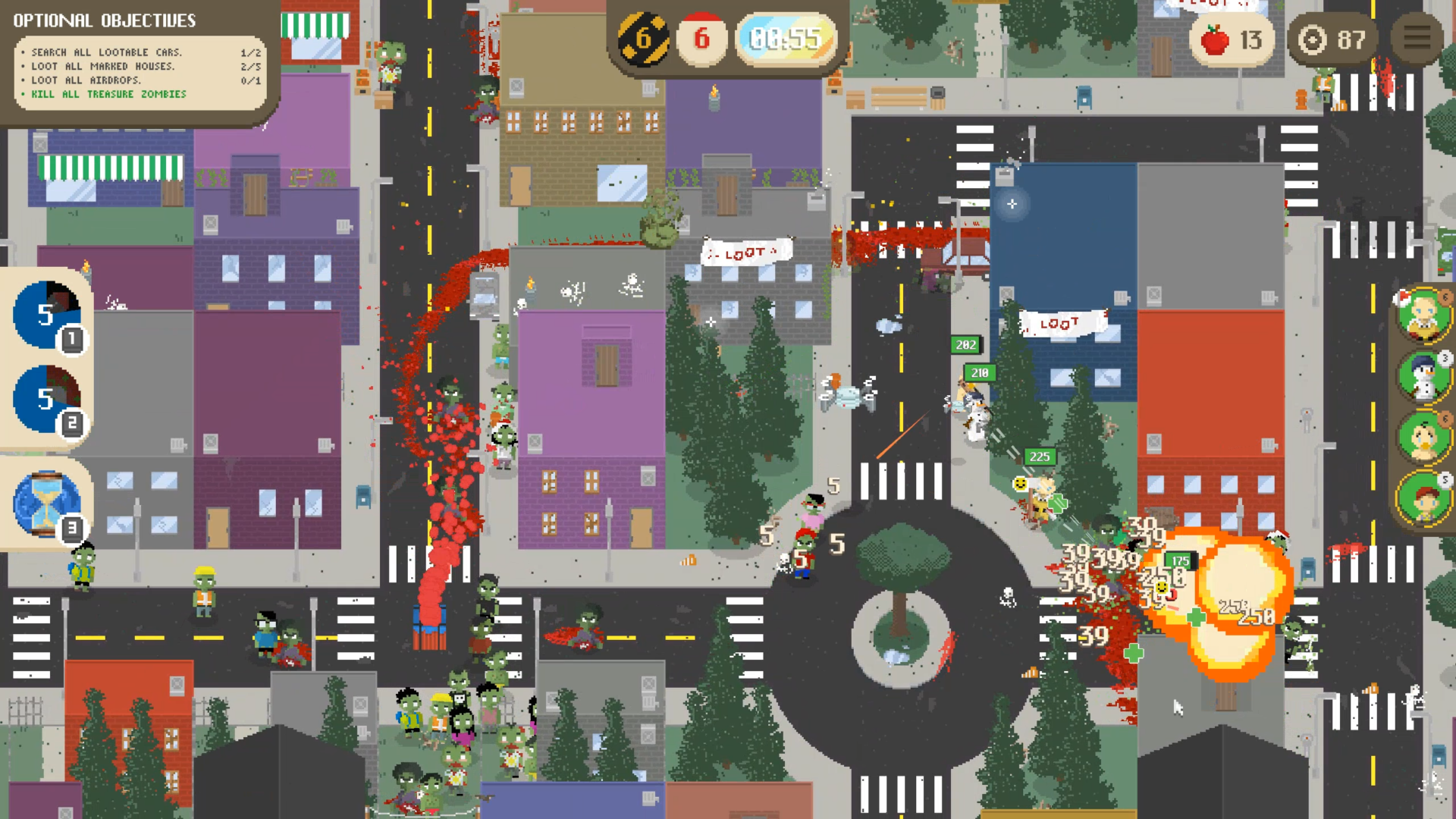 Yes, there is a snowman on my team. What more do you need? (Image courtesy of Pixelsplit)

Sure, some of these abilities can be pretty overpowered, and some are definitely more useful than others, but that just comes with the territory for rogue-lites. Unpredictability and adaptation are hallmarks of the genre. Some runs will be harder than others, and it’s the player’s job to compensate for that.

Unfortunately, the game has deeper issues.

The Jank Is Real

DEADLY DAYS has an identity crisis. It’s trying to be both a casual, mobile-esque experience and a deep, tactical action game. Unfortunately, these two sides never mesh together. The game rewards strategic, fast-paced tactics, but it lacks the mechanics to support these strategies.

For example, the controls in this game are wonky at best. They’re fine when you’re going from A to B, but that’s about it. Sometimes you need to loot a house, and you want a certain character to guard it while another goes inside. Ideally, I could select which character should go in and which should stay behind, based on their health, skills, and weapons. But there doesn’t seem to be any way to select specific characters in this game.

So instead of clicking on Jimmy and telling him to go inside, I’m frantically clicking the house as characters go in and out, waiting for the right one to be randomly selected. Meanwhile, zombies are swarming the area and I’m wasting precious time.

Exploration is pretty janky as well. If your characters use an ability to teleport across the map, the camera doesn’t follow them. If you forgot where your vehicle is, you’ll have to scan the area until you find it. Some of these levels are huge as well. Locating the bus should be as simple as a button press, sending the camera back to its location. Now, these are nitpicks at best, but they add up to a frustrating experience.

But that’s just the beginning of the issues. The game features controller support, and sometimes it works pretty well! Other times, certain buttons just… stop working.

Changing weapons can be a bit clunky as well. From what I’ve seen, you need to unequip a weapon before you can give it to another team member. This is a little thing, but it adds an extra step to squad management that just isn’t necessary.

But the real issues are the glitches. While rare, they can mean the difference between life and death. Sometimes characters will teleport a few yards away from the rest of your team… straight into a horde of zombies. Sometimes, when you activate a power, nothing happens, which means you can’t use it for the rest of the round. Other times the WRONG power activates. All of these bugs have gotten me killed and, in a rogue-lite, that’s just not acceptable.

Now all of this would be fine if this was an easygoing experience, but it’s not. If you play this game casually, you’re going to die.

And that’s the core problem with DEADLY DAYS. It pushes the player in a direction that it just can’t handle.

But don’t let these issues dissuade you. DEADLY DAYS is a great game overall. The gameplay is both accessible and deep, and it offers endless replayability. If you’re looking for a satisfying rogue-lite with a lighthearted tone, and if you’re willing to overlook some minor grievances, then this game is definitely worth checking out.

DEADLY DAYS is available on Steam for $11.99. Let us know what you think about the game, and check out PixelPop News for more!