by Josh Littman on August 2, 2019
Nintendo
43
0
previous article
Pokemon and the National Dex Controversy
next article
For The Last Time, Video Games Do Not Cause Violence - Pixelpop News

On July 26, the latest entry in Nintendo’s renowned turn-based strategy RPG series, FIRE EMBLEM, was released! FIRE EMBLEM: THREE HOUSES is the sixteenth entry in the franchise. Released for the Nintendo Switch, this is the first home console (sort of) entry in the series since the Wii’s FIRE EMBLEM: RADIANT DAWN in 2007. And what an entry it is! THREE HOUSES has thus far been a roaring success in the series, smashing previous sales records. In the UK, it beat out WOLFENSTEIN (across all platforms!) to be the number 1 seller.

Of course, the most recent titles in the series, such as FIRE EMBLEM: AWAKENING and FIRE EMBLEM: FATES, have been… divisive. While both were undoubtedly huge successes that brought tonnes of new fans to the series (particularly the former), there were many fans, including myself, who were unhappy with the series’ direction with those games.

This mainly extended to the non-gameplay elements such as story, lore, and characters; both were solid and fun mechanically. But the characters and world weren’t nearly as fleshed out as in prior entries, while the plots could be charitably described as ranging from “rubbish” to “car crash”.

But the rantings and ravings of jaded FIRE EMBLEM veterans like myself are not the point here. What I am getting at is: does THREE HOUSES excel where AWAKENING and FATES lacked? Is it a game that can be enjoyed by series newbies and jaded veterans alike? And, most importantly, is it worth buying?

This review will serve as an analysis of the game to help answer these questions, while also remaining as spoiler-free as possible.

So what’s THREE HOUSES all about? 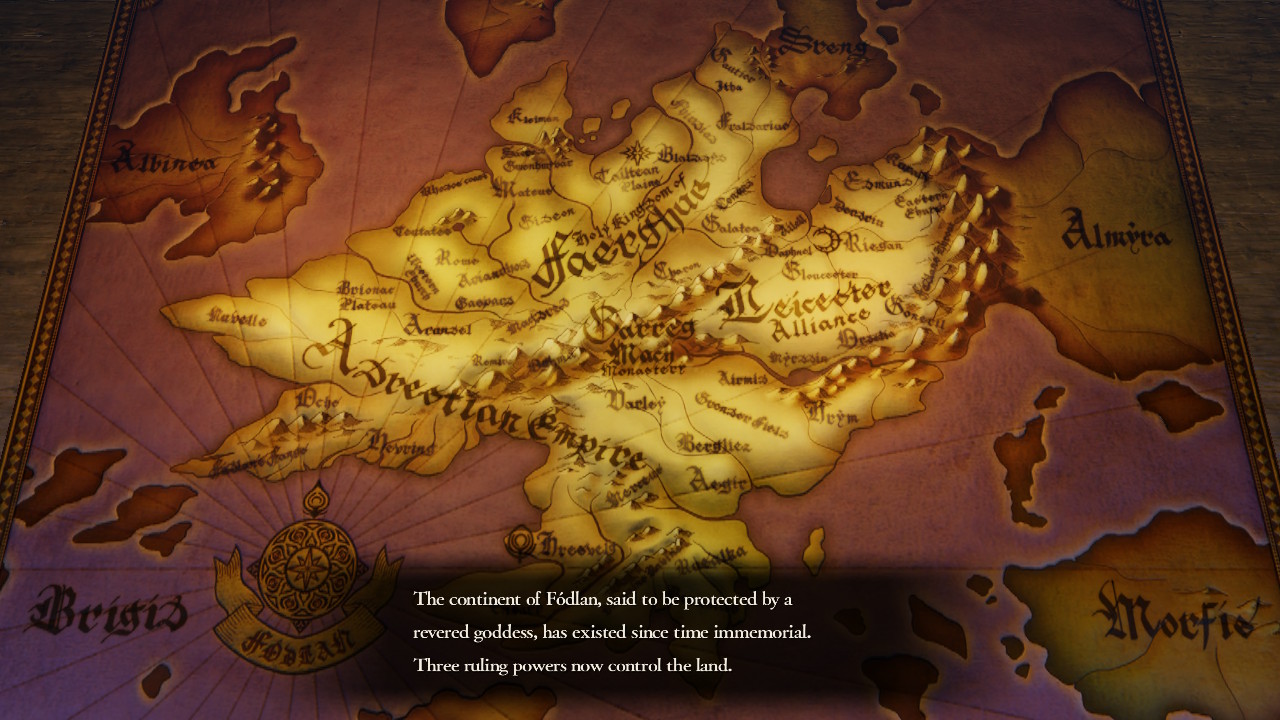 The game takes place on the continent of Fódlan (Image credit: Nintendo)

The setting of THREE HOUSES is the continent of Fódlan, pictured in the screenshot above. With a lot of Celtic (and, to a lesser extent, English) influence in the setting, it consists of three main countries: the Adrestian Empire, the Holy Kingdom of Faerghus, and the Leicester Alliance. These nations, while having warred in the past, currently exist in a state of relative peace and harmony. But will that last?

At the center of the continent lies Garreg Mach Monastery. It is a neutral entity not under the rule of the three main countries. It is also the home of the Officers Academy, an elite school where students train in the art of war. And you, the protagonist, are made a professor at the academy shortly into the game!

Yes, like AWAKENING and FATES before it, THREE HOUSES has a player avatar (default name Byleth) as a unit and character in the story. However, Byleth differs from AWAKENING’s Robin and FATES’ Corrin in a number of ways. First and foremost, they are a silent protagonist. You can communicate with other characters via (unvoiced) dialogue choices, but otherwise they stay mum, not even close to the chatterboxes Robin and Corrin were. In that respect, they resemble the original player avatar, Mark from THE BLAZING BLADE, more than more recent incarnations, as he was also a silent protagonist (though Byleth has a much larger role in the story overall than Mark). 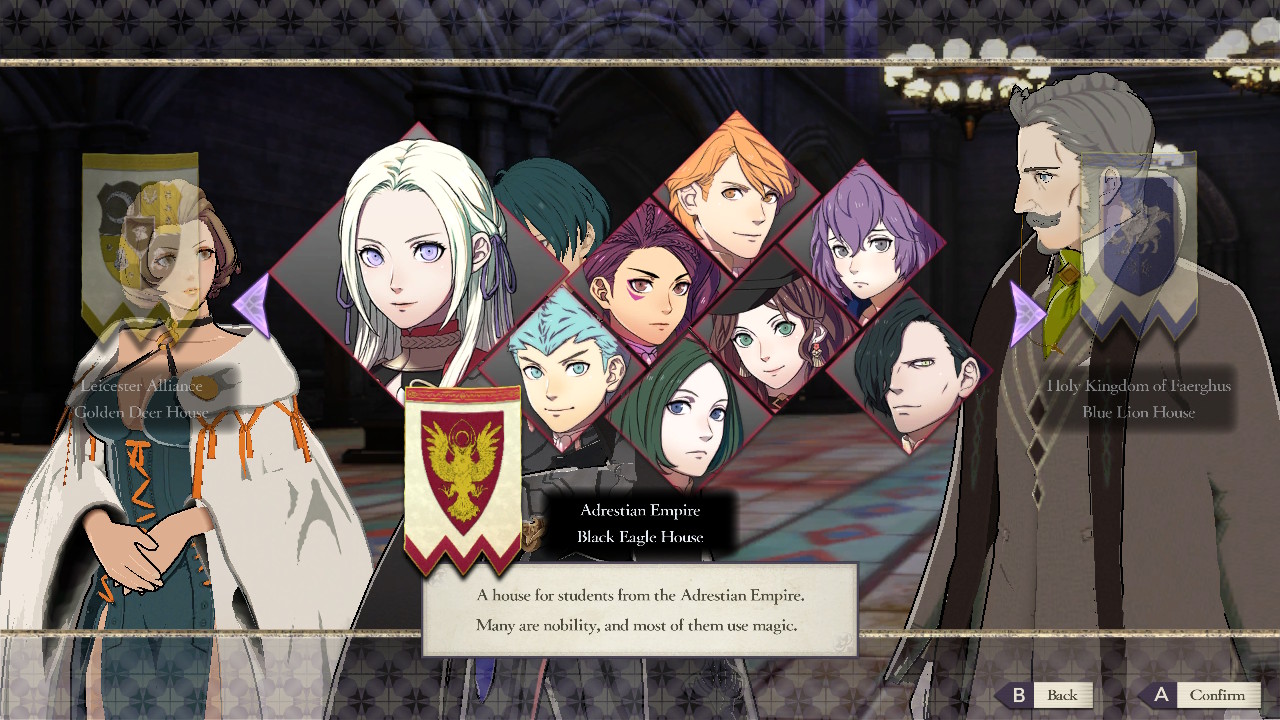 One of the three houses you can pick, the Black Eagles of the Adrestian Empire. Which will you pick first? (Image credit: Nintendo)

As I said, I shan’t go too deep into the story or lore so as to keep this review as spoiler-free as possible. But what I will say is that the world-building and lore in this game is top-notch. The world of Fódlan truly feels fleshed out and alive. It is comparable to the Tellius duology, PATH OF RADIANCE and RADIANT DAWN, in that regard. And it obviously stands head and shoulders above AWAKENING and FATES.

Early on in the game, you will pick one of three houses at the academy. Hence the title! Each house corresponds to one of the three nations of Fódlan . For my inaugural game, I picked the Black Eagles of the Adrestian Empire, because eagles are cool!

Each house will be its own adventure. And quite an adventure, at that! While I’ve still yet to get through my first playthrough, reports say that it’s around 80 hours of gameplay… per house. Meaning that getting the full experience will take 240 hours! Now that’s bang for your buck! It’s rather telling that just one house is more full of content than the entirety of FIRE EMBLEM: FATES, which is two full-priced games and DLC. Not to mention that there is DLC on the way for THREE HOUSES too!

So what’s new in THREE HOUSES? 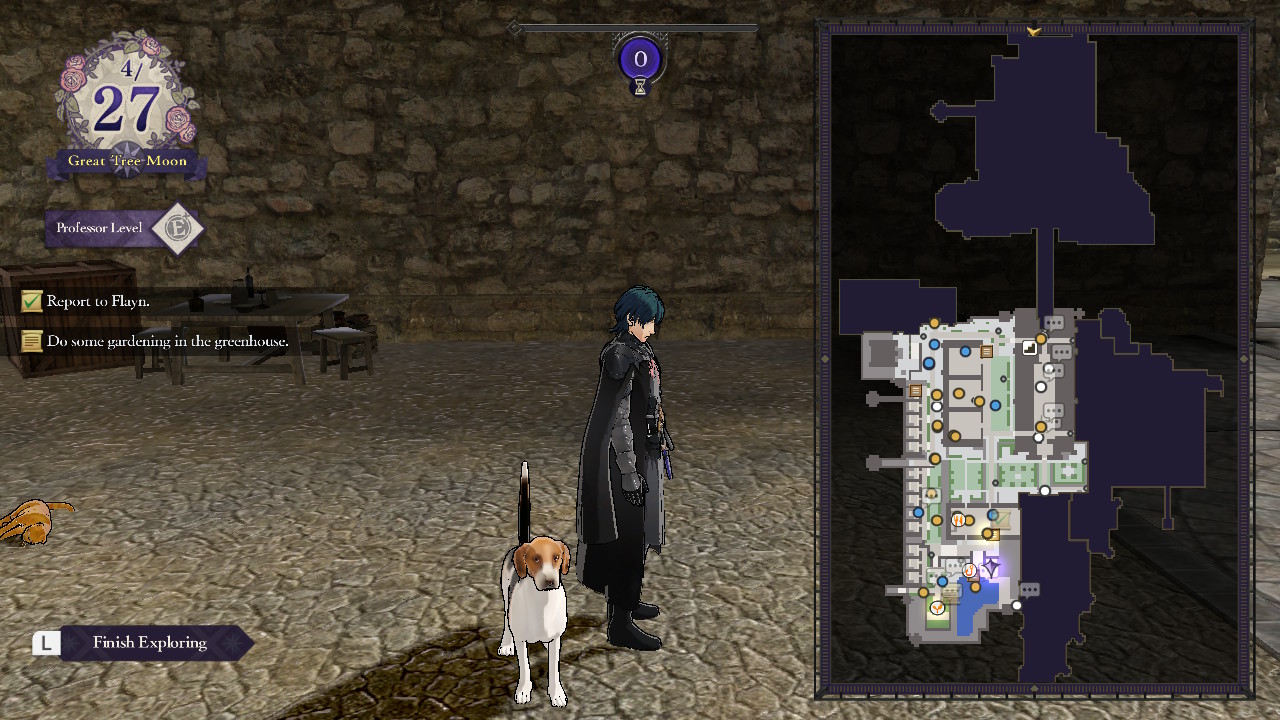 One of the new additions is exploring the monastery… and dogs! (Image credit: Nintendo)

Mechanically, THREE HOUSES is a unique beast in the FIRE EMBLEM series. In some ways, it’s a huge change in how things work. In others, it builds on what worked in previous installments while streamlining the game and jettisoning what did not work. Even a veteran FIRE EMBLEM fan like myself needed some time to get to grips with the new mechanics. Yet at the same time, the new mechanics work. There’s definitely a lot to take in, but it is integrated into the game (which is generous with instructions and tutorials if desired) in such a way that it does not feel overwhelming. It helps that the game does not introduce them all at once, but are rather intersperses throughout the early game gradually. It eases you into it.

I shall not go too in-depth into the new mechanics I am yammering about, in the interest of brevity and because some mechanics are themselves spoilers. So here is a few of the major ones.

The biggest one is the Monastery, pictured in the screenshot above, where you are a professor. The title of “professor” is not simply for show; you actually need to teach, take care of, and form bonds with your students. This includes lessons, performing activities and quests, and so on. This may sound rather odd and kinda boring for a FIRE EMBLEM game, but trust me when I say it’s more fun than I’m making it sound. I’ve not played the PERSONA games myself, but friends of mine who have played PERSONA said that THREE HOUSES reminds them of that. In a good way!

The Ties that Bind 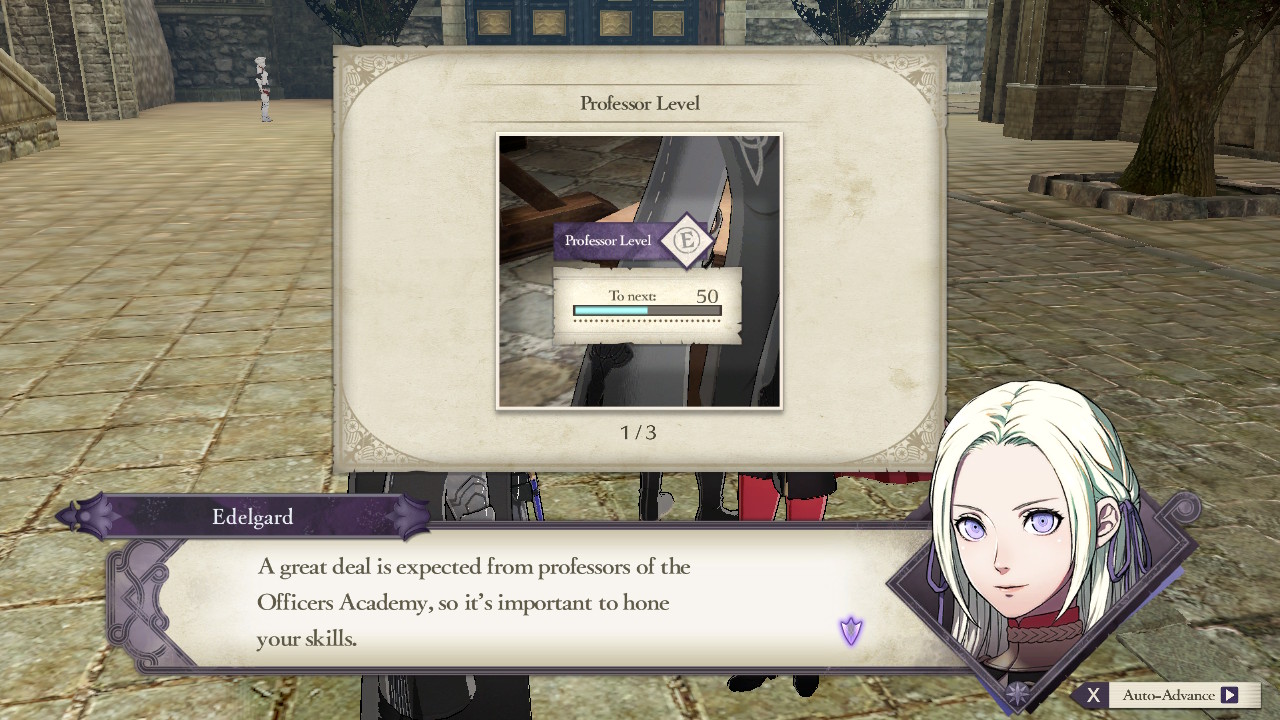 Take being a professor to the next level… literally! (Image credit: Nintendo)

Overall, the key to the new mechanics is the ties and bonds you will form with the characters. Such bonds have been central to other recent titles in the series as well, but they are arguably even more essential here. The good news, however, is that these mechanics feel natural. They integrate into the experience seamlessly, not feeling shoehorned in at all. Combined with traditional FIRE EMBLEM gameplay that has been enhanced, streamlined, yet are still just as tactical and fun, I feel now is a good time to get to…

The Verdict: Is THREE HOUSES worth buying? 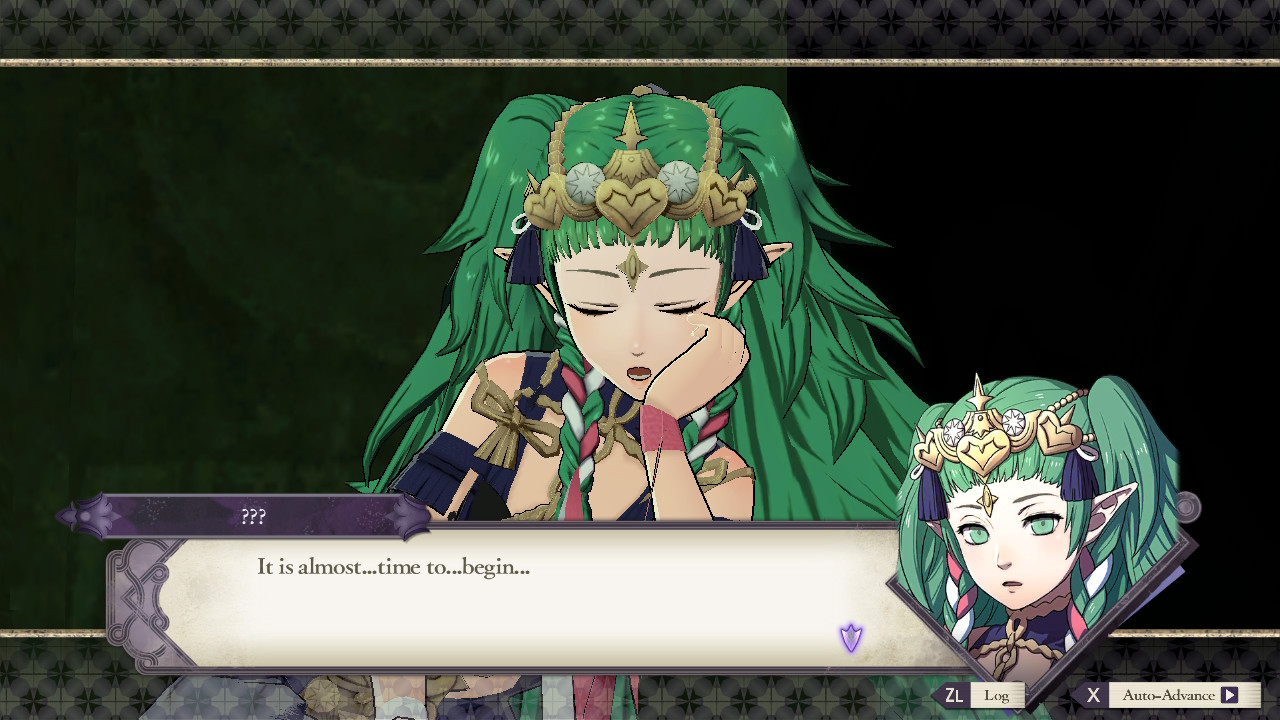 Begin one hell of an adventure! (Image credit: Nintendo)

I think it may be obvious what my answer here is going to be. It kept me occupied for an entire transatlantic flight, after all, despite some stiff competition from other Switch games. That counts for something!

But regardless, the verdict. The answer to that is a resounding yes!

As I have said before, I have been a FIRE EMBLEM junkie for quite a long time, ever since I first played PATH OF RADIANCE in 2005. I am what some in the fandom may call “one of those jaded elitists”. I will make no secret of the fact that I’ve been unhappy with FIRE EMBLEM’s direction post-AWAKENING (barring SHADOWS OF VALENTIA, which is an expanded remake of the second game in the franchise, GAIDEN), and that I had some reservations about the game from what I saw in the Directs (though I’ve gone into it mostly blind).

Those reservations were for naught. 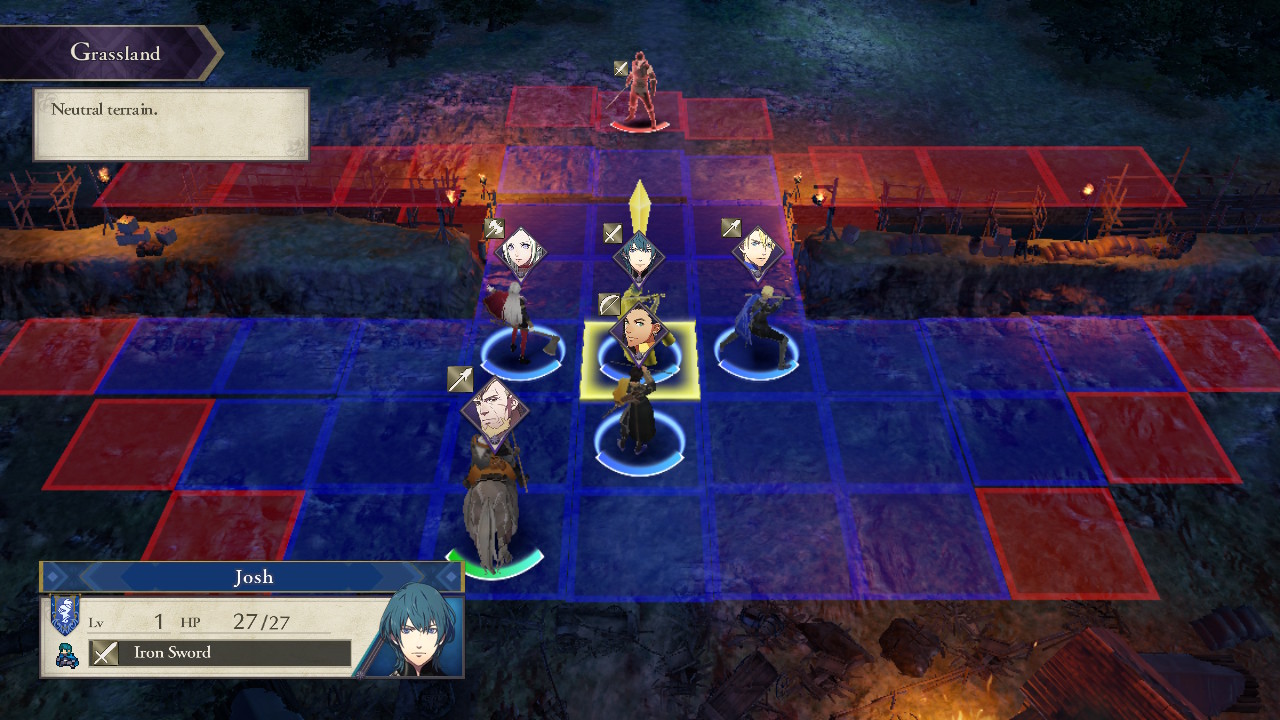 Pretty much everything about this game shows polish and effort. The voice acting is probably the best in FIRE EMBLEM history. The world and lore are engaging, fleshed out, and fascinating. The gameplay, in-battle and out, is fun. The characters are distinct and entertaining. The game definitely has to keep a lot of balls in the air, but it just works. In my view, this is the best original (ie not a remake) FIRE EMBLEM game in quite some time.

This is a game I feel fans of the series can enjoy no matter what. Whether you’re a grumpy veteran like me, or a fresh-faced newbie to the series brought in by newer titles, this game will be entertaining and fun for you. Hell, even if you’ve never played a Fire Emblem game before, this could be a good gateway drug!

Halloween 2019 is finally here! To celebrate, let's take a look at some of the classic spooky moments in gaming!

DEADLY DAYS is a rogue-lite zombie survival game where you can play as a katana-wielding 9-year-old. What more do you need?
Comments
Leave a reply