The only games you may have played from the Crytek developers are the games from the CRYSIS franchise or RYSE: SON OF ROME. If you haven’t played or heard of any of those games, then their latest really deserves your attention. HUNT: SHOWDOWN is a player versus player versus environment (PvPvE) horror shooter with a unique era to explore.

HUNT: SHOWDOWN was released over a year ago on early access Steam. Since then, Crytek has released significant updates and bug fixes to the game and they are still supporting it. Now, the game has reached Xbox Game Preview which will allow more people to play the unique shooter. HUNT is a breath of fresh air in a world of shooters and battle royale games. It mixes gameplay with the environment seamlessly and the era it is set in gives it a cryptic look.

HUNT: SHOWDOWN pits players against other players and a slew of environmental hazards. If you play classic mode, you play as a hunter whose job is to locate three clues, kill the boss, banish it to hell, and extract with its bounty. It is not as easy as it sounds. Other hunters are looking for the same bounty and will not hesitate to kill you. You will also have to tread across a map filled with zombies, hellhounds, and various other infected creatures. 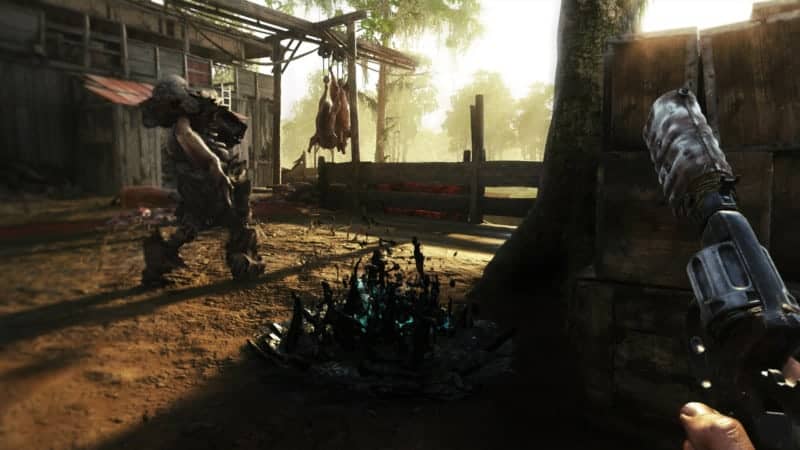 Courtesy of Crytek – A hunter approaches a clue guarded by an armored.

I should also mention HUNT: SHOWDOWN’s brutal mechanic that makes it really stand out from the rest: permadeath. Permadeath is nothing new to video games, but HUNT embraces it completely. If your hunter is killed in combat, then you lose that hunter forever. There is no way to bring them back. What makes the blow even worse is everything you had equipped to that hunter will be gone. You will have to hire a new hunter, equip new items, and level them up again. It is a strenuous process, but if you are able to keep your hunter alive until level 25, then you can retire them for massive amounts of experience points. HUNT is all about taking greater risks for great rewards.

On the other hand, you could try out quickplay instead of the aforementioned classic mode. Quickplay leans into the battle royale genre rather than the classic mode. Instead of entering the map with all your equipment in hand, quickplay drops you in with a low-level weapon and requires you to search the map for better ones. Weapons and tools populate barns, houses, and wagons. What is worse is that you are hunting alone. There is no duo option here so be careful. 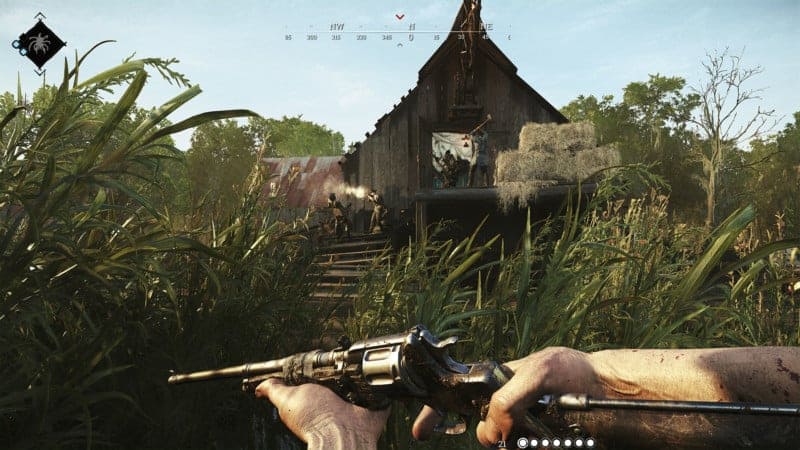 Courtesy of Crytek – A hunter stalks an enemy duo.

The Era affects the Environment

HUNT: SHOWDOWN doesn’t feel like a battle royale for two reasons: (1) the time period it takes place in is different among all others and (2) the environment Crytek has set the game in amps up the horror vibes. HUNT takes place in the Louisiana bayou during the late 1800s. This gives the two maps an eerie feeling because the buildings are made of wood and stone, there are large bodies of water placed around them, and the weapons have a unique look. 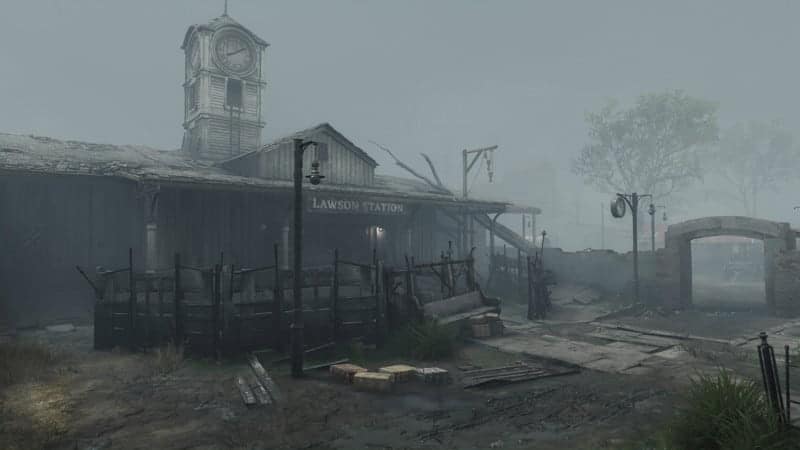 HUNT won’t allow you to mow down several enemies at a time. Weapons usually require a cock for a new shell to enter the chamber. A handful of weapons carry only one round. Shotguns have a short-range or tight spread making them suitable in a few situations. Even scoped weapons have flaws because each scope has a grime filter making it only suitable for a certain distance. Weapons like these require more methodical approaches to combat which in turn makes combat slower. Oh, and if you don’t hit the reload button when you are out of ammo, the game will not automatically reload for you. Keep that in mind.

Even the NPCs and bosses have their own kind of style. There are currently three different bosses that hunters can track down. Each one is more terrifying than the last. The Butcher is a menacing slow brute with a pig as a head while the Spider and Assassin are fast-moving monstrosities. Arachnophobes won’t be able to handle the large Spider scurrying around the building shooting poison. Meanwhile, the Assassin is made up of thousands of insects. This mass of creepy crawlies creates a humanoid creature capable of quick movements and devastating attacks. They are menacing creatures.

The NPCs littered across the map are no different. Zombies or grunts are the standard NPCs across the map. Monster variations are also sprinkled throughout. You could face the Hive which controls a swarm of bees. If you get too close, the bees will attack causing poison damage. Be sure to aim for her head. The style of theses grotesque creations is unlike anything else I have seen in games or movies. Crytek is also continuing to add more variations in NPCs and bosses through their updates. 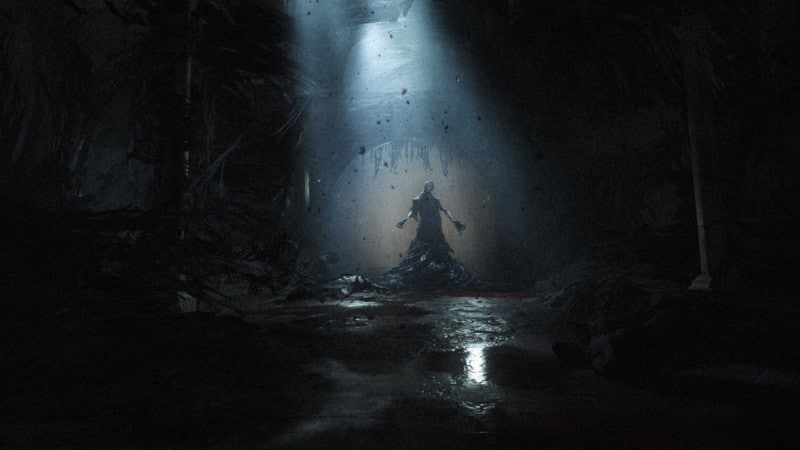 Courtesy of Crytek – The Assassin

HUNT: SHOWDOWN blends its gameplay, environment, and style in a phenomenal way. Crytek has created a brutal cocktail within the battle royale genre that doesn’t necessarily fit. The lack of lighting in buildings, the different style and feel of weapons, and the significant difference in visuals make the maps daunting places. On top of the environment, you have enemy hunters and other monsters on the map that never hesitate to kill you.

Halloween 2019 is finally here! To celebrate, let's take a look at some of the classic spooky moments in gaming!

DEADLY DAYS is a rogue-lite zombie survival game where you can play as a katana-wielding 9-year-old. What more do you need?
Comments
Leave a reply