MEGA MAN 11 Is Back In Blue In ComicsVerse’s Review!

I’ve been a Mega Man fan since the days of Nintendo Power (which makes me officially old as hell, folks). There’s just some kind of alchemy in that often imitated but rarely matched formula. The perfect running, jumping, climbing and shooting mechanics of the original and its glut of sequels (some perfect, some less so) still hold up to this day.

So when I heard that a new entry into the main series was on its way from Capcom – one that updated the graphics but stuck to the core gameplay, I got very excited. But does it live up to the legacy? Here is our MEGA MAN 11 review!

The first thing I noticed is that the graphics have been given a graphical upgrade. While MEGA MAN 11 retains its classic 2D side-scrolling gameplay, the character models, levels, and backgrounds have been rendered in gorgeous 3D. 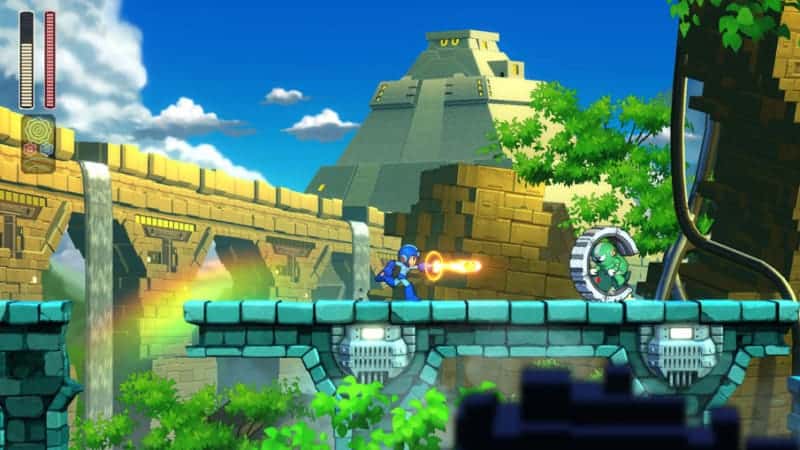 And yet, it still looks very much like a MEGA MAN game. It’s all in the specific little details: the enemies with the large, drowsy eyes. The ominous “Dr. W” gates that lead to the boss rooms. Hell, even the way that Mega climbs up and down ladders just looks right. Clearly, the visual artists are fans of the series and did their homework.

The same goes for the gameplay. As tradition dictates, the story remains completely bare-bones (something about a young Dr. Light and Dr. Wily arguing at university)? As always, it only exists to set-up the situation where Mega must defeat 8 evil robot masters, in any order, before invading the labyrinthine castle of the evil Dr. Wiley himself. 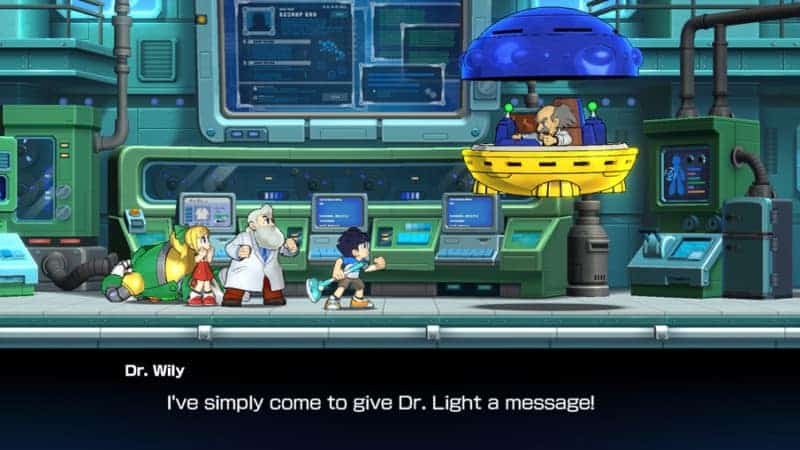 Traversing through the levels feels correct, as well. As a longtime MEGA MAN player, I instantly knew that pressing down and jump would allow me to slide under obstacles. That I could grab onto ladders mid-air by pressing up. That my underwater jumps would carry me much farther than normal.

This is all good stuff, people. I’m all for gameplay innovation, but if you’re going to call your game MEGA MAN, it damn well better feel like MEGA MAN.

But it also makes some welcome gameplay upgrades that greatly streamline the experience. For example, instead of stopping the action and finicking around in the pause menu to swap weapons, you can just scroll through them with the left and right triggers, or use the right stick to access them via a selection wheel.

Also, the Rush Coil and Rush Jet are accessed with single button presses. These are great updates that I would have appreciated back in the classic games.

Most MEGA MAN entries have added some new gameplay innovation to the mix. (Did you know that both Rush and the slide move weren’t introduced until MEGA MAN 3?) 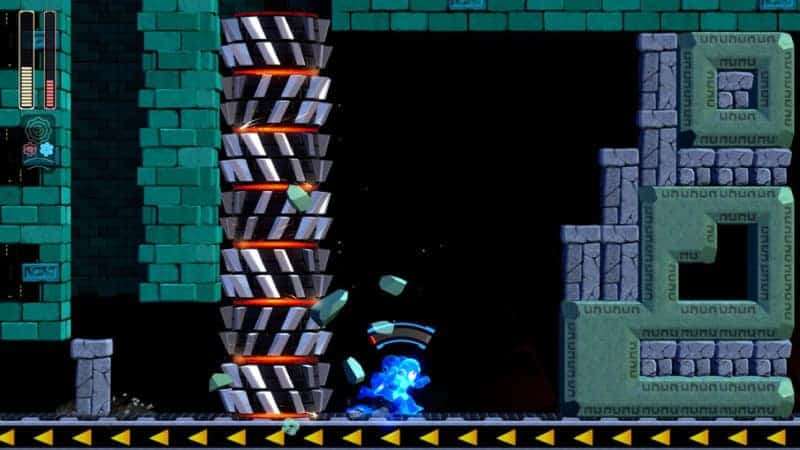 The double gear system in action. Image courtesy of Capcom.

The “double gear system” makes its debut in MEGA MAN 11. Pressing the right bumper slows down time, making it easier to dodge enemies and nail tricky jumps. The left bumper, on the other hand, makes you more powerful, increasing the firepower of both your standard mega-buster and acquired weapon attacks.

But here’s the rub: both modes share the same power meter. If you let it build up to its limit, both systems will short-circuit and you won’t be able to use either for a period of time that extends far beyond its normal cooldown.

My initial worry was that this system would make you too powerful and cause the game to be too easy. But the designers did a good job of moderating the skill meter so that it must be used short bursts. It’s pretty much impossible to overuse the system and in order to succeed you have to become adept at when to use it and when to let it recharge.

But the element that most sets each MEGA MAN game apart from each other is the selection of whacky robot masters, each with their own themed level. Do the robot masters of MEGA MAN 11 live up to the greats of the past?

Ehhh… yes and no. 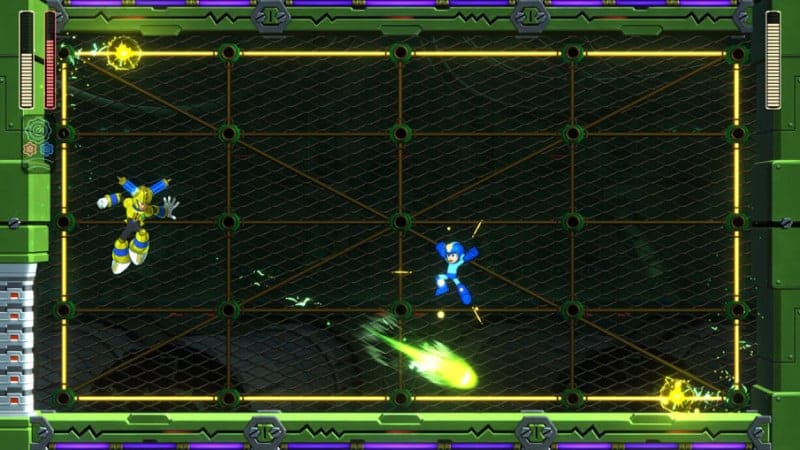 Bounce Man instantly stands out as the most creative. His silly design goes hand-in-hand with his totally bonkers level that plays out like a giant, deadly bounce castle. Most of the surfaces consist of bouncy balls, so you need to get creative with your jumps in order to bing-bong up, over and around obstacles.

I also found myself charmed by Tundra Man, an aspiring figure skater whose icy level comes to life by the sounds of wintry winds and the crunch of boots on ice.

And, despite an over-abundance of fire-themed characters throughout the series, Torch Man’s summer-camp themed level was super clever. 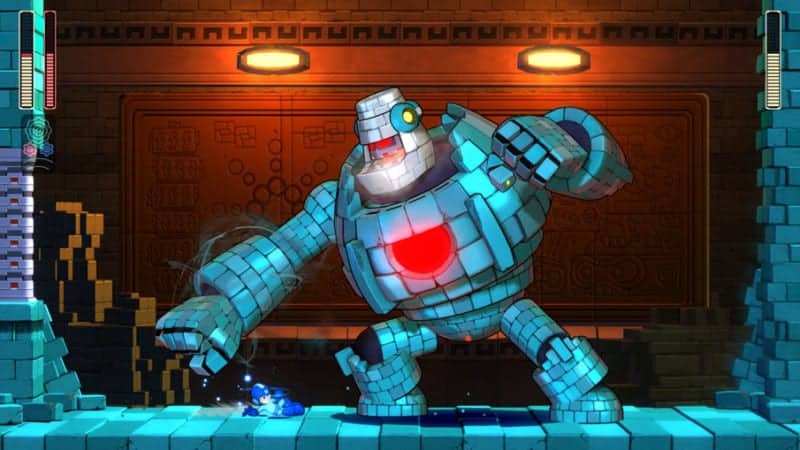 The battle with Block Man. Screenshot courtesy of Capcom.

On the other hand… did the MEGA MAN series really need another electricity or construction themed robot master? Their levels left me with a disappointing sense of “been there, done that.”

Block Man also gets by on a very vague theme (uhh, blocks, I guess?) But at least his boss fight brings a unique element when he grows to a huge size. Also, I found his weapon to be the most useful of the lot – it allows you to drop blocks on enemies from the top of the screen, which makes short work of annoying enemies shooting at you from hard-to-reach platforms.

As for the theme songs – I’m sad to report that for a game series so famous for its fantastic music, none of the boss level themes stood out in any way to me. A shame.

Another hallmark of the classic MEGA MAN games has always been its “tough, but fair” approach to difficulty. Some games in the series, I think, pushed it a little too far (cough MEGA MAN 9 cough). But, I think MEGA MAN 11 gets it just right.

Starting out in a new MEGA MAN game, without having a feel for the levels and not knowing the key to the rock-paper-scissors-like boss battle strategy, can be a very frustrating experience. I opted not to cheat by looking up the robot master weaknesses online, so I had to flounder a bit, struggling through each level and getting a bit further each time. (Seriously, I hope the underwater spikes in Acid Man’s stage don’t have a mother, because I said some TERRIBLE things about her). 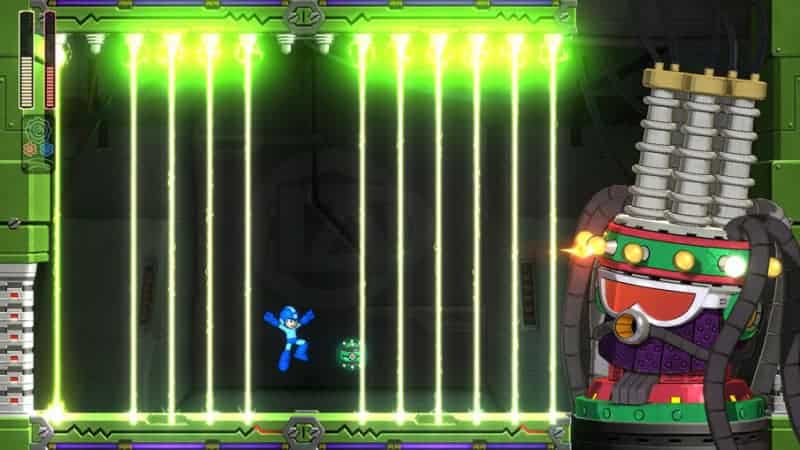 Then, once able to get through the stages, I routinely got my butt kicked by the robot masters until I slowly but surely learned their attack patterns and which of the other boss weapons they’re weak to. They’ll always fall easily to one of them. The trick lies in learning which and then planning your level strategy around that.

MEGA MAN 11 offers easier difficulty levels (Newcomer and Casual) in addition to Normal. There’s also a Superhero setting, for insane people. Normal is hard enough for me, thank you very much.

The game is indeed difficult, but not unfairly so. You learn from your mistakes, you get better at the levels, and then when you do conquer a stage, you feel a sense of accomplishment. Exactly as it should be.

Overall, MEGA MAN 11 is a good entry to a series that will always feel to me like a warm, cozy blanket. I love the updated, modern visuals, and the gameplay feels right. It’s challenging, but not punishing.

However, it doesn’t really add anything remarkably new to the series, either. The double gear system is cool but doesn’t elevate the game in a significant way. The robot masters and their levels are a mixed bag.

And it’s a relatively short game. Yes, there are time-trial challenges and the like with online leaderboards. But, ultimately, you’re still just playing the same levels over and over again.

But, if you’re a fan of MEGA MAN or challenging old-school platform shooters, there’s a heck of a lot to enjoy here and I would definitely recommend checking it out.

A new Nintendo Direct was released today, showcasing upcoming 3DS and Switch content. What was announced? What do we think? Read our article to find out!
Comments
Leave a reply