by Andrew Kreiss on October 25, 2018
Consoles
2
0
previous article
MEGA MAN 11 Is Back In Blue In ComicsVerse's Review!
next article
Creepy Music In Gaming For Halloween
Contents

It’s October, the leaves are turning, there’s a chill in the air and here at ComicsVerse, we all know what that means! It’s time to count down some of our favorite spooky video game moments. Now, while everyone knows about the big ones, I’m here to talk about the smaller ones. In every list of the “Scariest Video Game Moments,” you’re bound to see the RESIDENT EVIL window dog or AMNESIA’s entire game, among others, but I figured it’s time to give some lesser known spooky moments their due.

As with everything, a fair dose of “Your Mileage May Vary” is in order, but as many of these never seem to pop up on other lists, I felt like they deserve a shot. This article also has some spoilers for all of the games, so consider this your fair warning!

METRO 2033 was released in 2010 on PC and Xbox 360. The game absolutely nails its atmosphere, contrasting the creaky Metros to the sprawling and hostile surface. It was hard to choose which level, but the clear winner is the library level.

Many action games lack any kind of tension because you can simply gun down whatever is scaring you. Throughout METRO 2033, you’ve encountered mutant enemies before and they can be easily killed, but the new librarian enemies are something special. The first time you encounter the librarian enemies can be a bit of a fright — they’re hulking behemoths with white, dead eyes and black, cracked skin. They move with a lope, almost ape-like, and do not seem to care about your bullets. If you run, they’ll catch you. You can kill them, but one of the ways METRO prolongs tension is the lack of ammo, and you’ll waste a lot just trying to kill one. 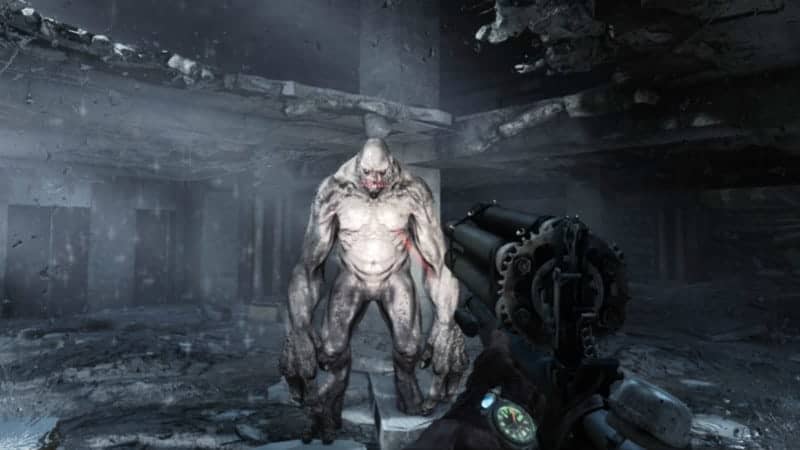 However, if you stare down an approaching librarian, literally putting your cross-hair between their eyes, they’ll stop. The way to get through this level is literally staring terror in the eyes. That’s something I’ve rarely, if ever, seen in a game, and along with the claustrophobic atmosphere the library level has stuck with me for a long time.

4. Playing Multiplayer as a Marine in ALIENS VS PREDATOR

Now, I’m not here to start a debate about the merits of a certain sci-fi franchise. However, the 2010 video game ALIENS VS PREDATOR was an absolute blast. I’ve always loved the nonsensical mashing together of the two franchises, and while video game-wise either has been hit or miss, I love this entry. While the campaigns were ok, playing through a combined story as either the Alien, Predator or Human, the multiplayer was where the game really shined. Each playable species had their strengths and weaknesses and were all fun to play. Despite some otherwise questionable mechanics (I’m looking at you, instant kill from behind mechanic), the game was a blast. 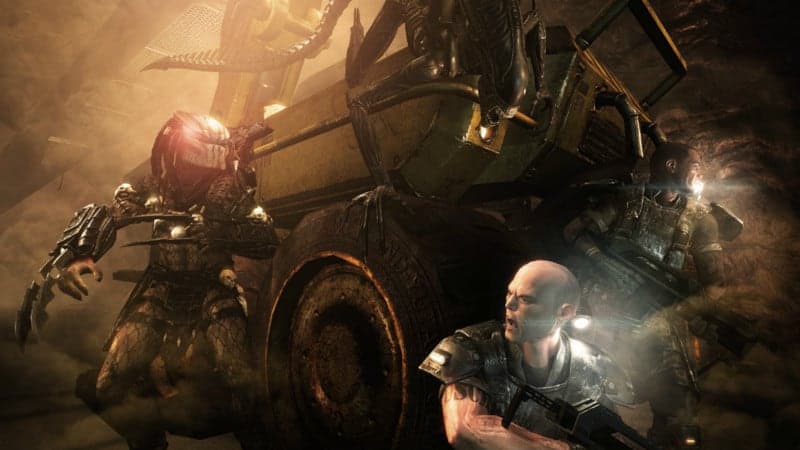 That’s you crouching while the cool kids fight. Courtesy of Rebellion

Playing as a Predator was fun as you had access to all their neat tech and could cloak and stalk your prey. Being an Alien felt great as you could climb the walls and surprise enemies with your blinding speed and tail. Playing as a Marine was a different story. While still fun, and having weapons that packed quite a punch, playing as a Marine was much different. Every second you stayed alive felt like a blessing.

The only reliable way to track enemies was the pinging of your motion tracker, and hearing the noise pick up as something approached went a good way to ratcheting up the tension.

This one might be cheating because… well it’s FALLOUT 3 — but it’s still spooky. You’ve wandered the wasteland, fought ghouls, aliens, mutants, and all sort of enemies. I bet you didn’t expect to find an Elder God in a random building, did you? FALLOUT 3 can be a spooky game when it wants to be, what with the roaming ghouls and even cannibal families! There’s something else, however, about the Dunwich Building. 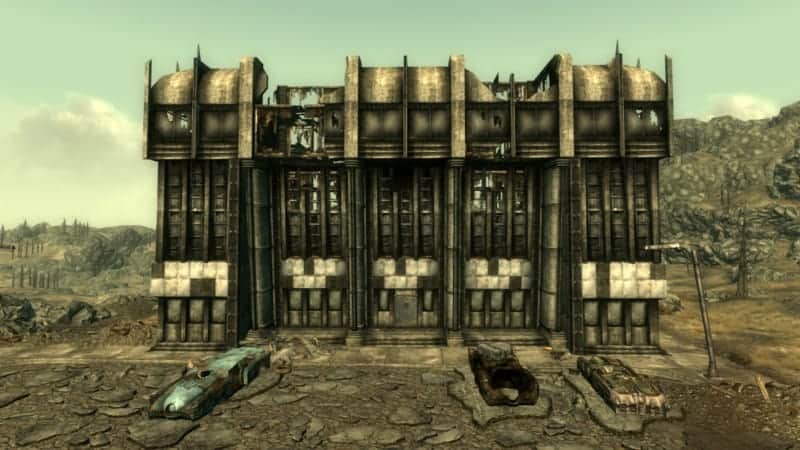 Nothing can go wrong in here, can it? Courtesy of Bethesda

The game goes out of its way to creep you out from the start, as you’ll hear footsteps, doors will randomly open and close, not to mention the whispers in your ear. As you progress through the building you’ll find the diaries of a man named Jamie, chronicling his descent into madness. (Oh, I forgot to mention the random corpses everywhere.) The thing that freaked me out the most is, while normally the models you find for “long-dead bodies” in FALLOUT are skeletons, this location has honest to god desecrated corpses lying around. No thanks!

Get to the bottom and you’ll find Jamie, now an irradiated ghoul worshiping an obelisk. When you kill him, the chanting won’t stop. Now, you’re left all alone in a basement with a strange obelisk and your own paranoia. Sweet dreams!

2. Meeting The One Reborn in BLOODBORNE

I don’t think BLOODBORNE counts as a lesser known game, but I love it, so putting it on this list is a no-brainer. In a game filled with good old gothic horror vibes, you can bet there were plenty of spooky moments. One moment stands out above the rest. You’ve fought your way through werewolves, infected townspeople, crows, mummies, and other horrors when the game throws you a curveball. 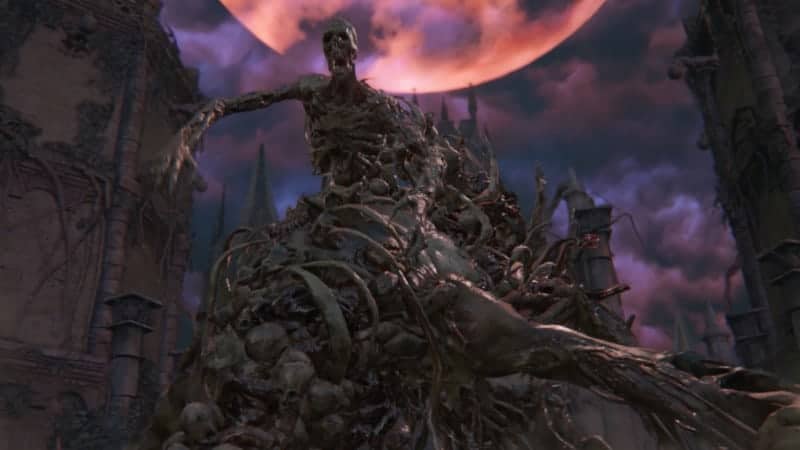 I’m so sorry I had to show you this image. Just be glad it’s not a gif. Courtesy of From Software

You enter the boss arena and next thing you know you’re facing down a twisted, screaming mess of flesh and bones. It doesn’t just start in the boss arena either, oh no. It takes its sweet time opening a hole in reality and oozing through it in all of its blood-covered, disgusting glory. It’s almost as if you’re watching it be born, but it’s just… so revolting. The fight itself is relatively easy, a lot of smashing, but seeing it for the first time is nothing short of terrifying. From there on out the game then switches gears from old-school gothic horror to an Eldritch. Hope you like fighting skinless monstrosities and carts full of sewn-together human corpses!

1. That &*%$ing Sewer Level in SHADOWS OF THE EMPIRE

Maybe it’s just me, but I absolutely loathe video game water levels. Now, I know you’re thinking, “Well, it probably comes from the water temple level in ZELDA!” You’d be wrong, it’s all this damn game’s fault. Being a 6-year-old when this game came out I was super pumped about getting to play through some iconic STAR WARS moments. Battle of Hoth? Yeah! Fight Boba Fett on Tatooine? Sign me up! Flying a Speeder Bike? Yes. Please. Walk/swim through a grimy sewer with water over your head while fighting tentacle monsters? No, thank you. To this day, I still have problems with water levels in my video games, and I blame everything on this. 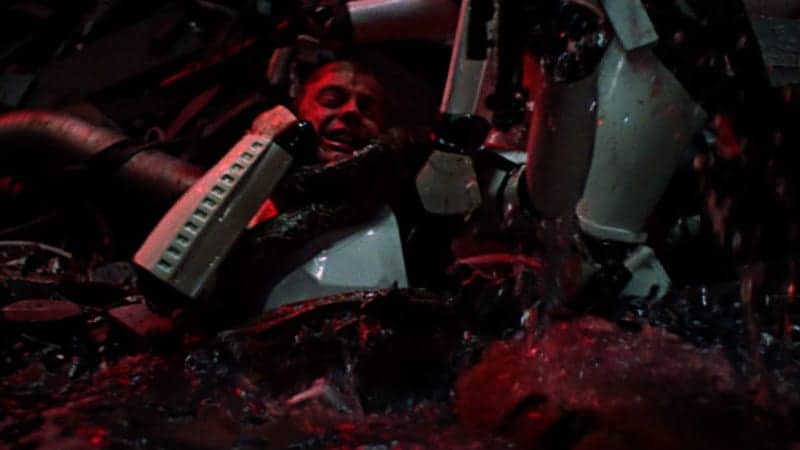 Hey kids, remember that time Luke got strangled? Didn’t you want to see what choked him? Now you can fight it. Courtesy of Disney

Up until this point, the game is a pretty fun, if by-the-numbers STAR WARS game. Suddenly, murky water. I never signed up to fight a terrifying tooth monster with one eye and tentacles underwater while making my way through its demon spawn-infested hell-lair. This level still terrifies me to this day, so thanks Lucas Arts. Thank you SHADOWS OF THE EMPIRE on Nintendo 64 for giving me my longest-lasting and most nonsensical fear. I owe you a lot.

Hey, at least as a consolation prize, the two levels after this were amazing.

For someone who adores Halloween as much as I do, I’ve never been one for scary games. The illusion is ruined for me almost the second I die and realize that whatever it is can’t actually hurt me. However, when a game has either such a great atmosphere, in the case of METRO 2033, or just plain old body horror, it can be hard to forget.

Did I miss any of your favorite “Spooky Video Game Moments?” Leave yours down in the comments!