What Is The History of Fashion Brands x Games (The Sims x Moschino)?

by Jenny Zheng on May 6, 2019
Consoles
11
0
previous article
Does Growing Up Mean the End of Video Games?
next article
Pro Melee Players Talk Competitive Smash 5 Play

In a pairing that generated somewhat of a buzz, Moschino collaborated with The Sims to launch a new collection on April 13th. It’s been a fun campaign: Moschino models lounge in a digitally rendered Sims background in ads. The iconic green plumbob’s are turned into earrings and patterns across a swimsuit.

The collaboration is not the first of its type: real-life fashion brands have been intermingling with the games since long ago. Uniqlo x Monster Hunter did it first and in subsequent years. Final Fantasy characters have appropriated expensive brands, and have been appropriated by luxury brands. Tommy Hilifiger, an all-American brand, has been surprisingly eyeing gaming structures and language on their Xplore line. Here, we look at past instances of real-life fashion brands’ collaborations with games and their flirtations with gaming technology.

Collaborations That Are More Than a Merch Line

When a game and fashion brand work together, we typically think of a line that has T-shirts featuring game characters and references. Merch, essentially. Think high-end graphic T-shirts slapped with a Yoshi egg from Bloomingdale’s or a pair of shoes covered in Princess Peach patterns from Vans. Those are all very good and well, but we won’t be focusing on these types of collaborations in this article.

The ones we’ll look closely at dip reality into the virtual nature of the in-game universe, or bring the in-game universe to reality in interesting ways. Anything that’s a commingling of a game universe’s rules and the real world’s rules, creating hybrid worlds and behaviors, is the pulse we’re trying to track down. Moschino x The Sims is a collaboration that slightly ventures into such territories. But before we dive into that news, we’ll pitstop along different periods of the 2000s in order to look at fashion brands and games that mix their realities.

The Monster Hunter franchise is a fantasy-themed action RPG. As the name implies, the player literally hunts down monsters to gain loot. This loot then enables them to develop gear, armor, and items to help them defeat stronger monsters. Repeat ad infinitum. It is a game where accessories and outfits are important since they’re crucial contributors to monster slaying abilities. Monster Hunter has been extremely popular in Japan since its inception, with editions regularly and easily breaking the million purchased copies mark.

In the North American and European markets, however, the game has been slow to catch on. Only with the release of Monster Hunter 4 Ultimate on the 3Ds in 2013, did the game achieve solid sales in the global market. 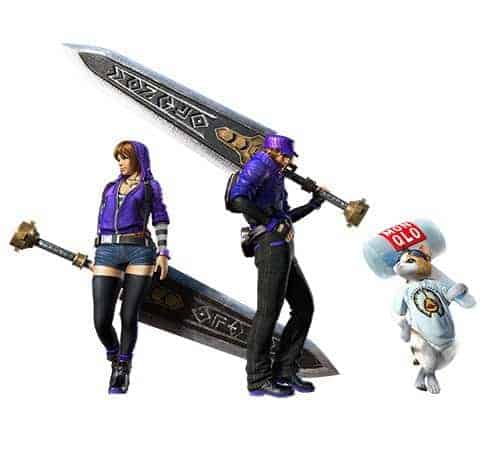 Not only were Monster Hunter-inspired T-shirts available for purchase in Uniqlo stores, but players could also experience the collaboration in the game by unlocking unique virtual clothing pieces and gear through tailored gameplay.

In 2012, Final Fantasy XIII-2 characters dressed in Prada for the magazine Arena Homme+ in celebration of the franchise’s 25th anniversary. At the time of its release, there was a buzz generated on the American interwebs. It was perhaps one of the first gaming and fashion crossovers to draw substantial attention. Designed under direction by Square Enix and Final Fantasy character designers, Prada gave no input on the 12-page photoshoot. The spreads feature rendered Final Fantasy characters, mixed in with truly uncanny clothing. It’s not the models themselves that are uncanny; it’s the clothing that sits at the uncomfortable threshold of either incredibly well-rendered or just real.

Louis Vuitton has also collaborated with the Final Fantasy franchise. The brand cast Final Fantasy XIII protagonist Lightning as the face of their 2016 spring/summer womenswear. In the campaign advertisement videos, Lightning leaps around and poses with different Prada bags. She occasionally brandishes them as if they are weapons and in other occasions, strikes a model catwalk pose. (A bit dissonant tonally for sure: is she modeling the handbags or going to use them to kill someone?) Louis Vuitton calls her a “virtual heroine” and the “perfect avatar for a global, heroic woman and for a world where social networks and communications are now seamlessly woven into our life.”

She even “gave” an interview with the Telegraph regarding the campaign, praising Nicolas Ghesquière’s designs and commenting on her own journey as a fashion model.  Not going to lie, there’s something vaguely discomforting and disingenuous about a brand trying to co-opt the Lightning by making her say some flattering stuff that’s wildly out of character. On the other hand, yeah, she’s an animated character and this is an interesting IRL narrative for her. But I’m of the advocate that virtual girls should and will belong to themselves, and not as avatars to sell clothing. (It probably feels more egregious manipulation in this case since if Lightning was true to her in-game character, she could care less about fashion!) 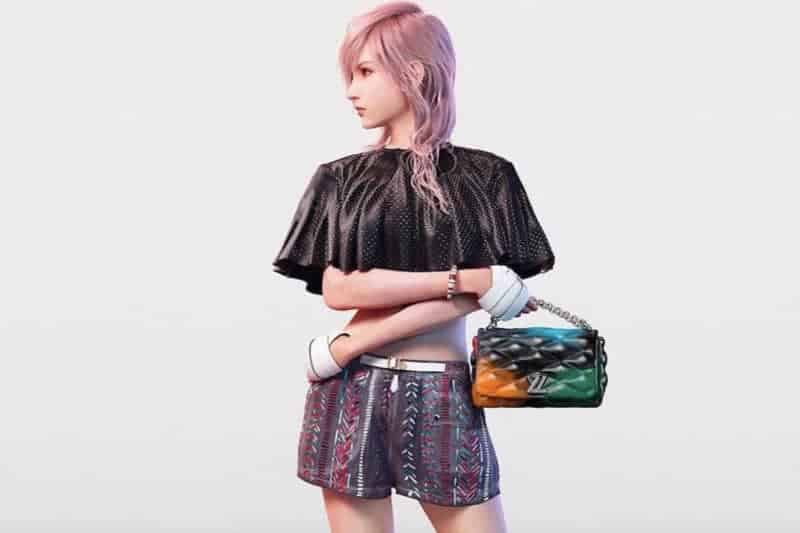 This one is a little bit different. Instead of a fashion brand collaborating with an existing game, it’s trying to make its own original game. The background to Tommy Hilfiger: it rose to prominence in the late ’90s for it’s all American design, largely popularized by hip hop stars.  (Snoop Dog iconically endorsed the brand by wearing a red, blue, and white Tommy rugby shirt on Saturday Night Live.) The brand later fell out of favor with the hip-hop community but kept much of the 90’s aesthetics with big blocky colors and silhouettes. In recent years, Tommy Hilfiger has also been experimenting with future-forward ideas about fashion.

As part of that future forward initiative, Tommy Hilfiger released Tommy Jean’s Xplore in 2018: smart-wear that gamifies dressing. The clothing and accessories are chipped and connected to a gaming app through Bluetooth. The app logs about how often you wear articles and where you go with them. You get points for every time you wear the clothing. Much like Pokemon Go, the app also encourages you to collect points in real-life locations. These points then translate to real-life perks such as gift cards, products, or VIP experiences. 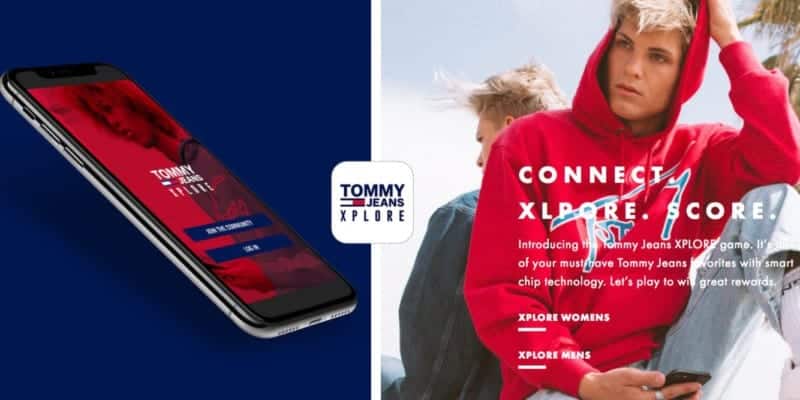 Not everyone thinks Tommy Xplore is innovative. Techcrunch calls it, at best, “a loyalty program requiring customers to overspend to join.” Admittedly, it does feel like its smart wear for smart wear’s sake, with a not very compelling “game” aspect unless you’re a diehard Tommy Hilfiger fan. Tommy Hilifiger is better known for it’s all American designs than anything to do with nerddom like gaming. The brand’s push into gamifing clothing doesn’t feel genuine or inspiring and rather feels too transparently like a brand making a cash grab by reaching into a different community they have no current currency with.

With those past examples, we now get to the very recent Moschino x The Sims collaboration. Moschino showcased its The Sims inspired fashion line at a Coachella desert party, which included items like this pixelated jacket ($625) and purse ($1,095). 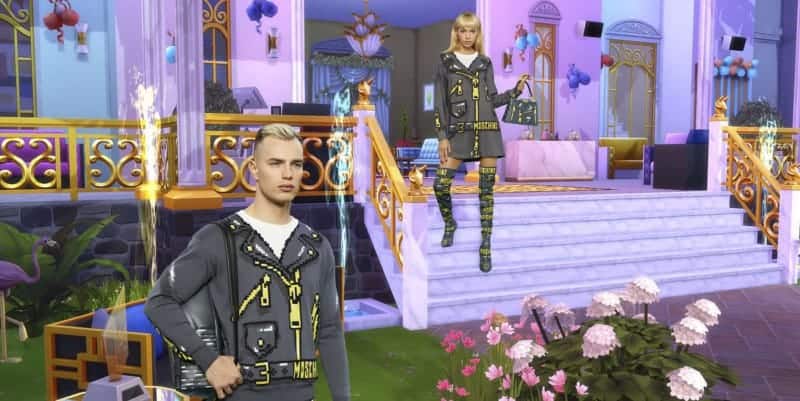 While the Final Fantasy franchise collaboration with fashion brands only showcased the game’s characters, Moschino makes itself somewhat part of the gameplay. The players in The Sims game can wear the virtual equivalent of one of the collection’s items while playing the game. (The Freezer Bunny, an in-game reoccurring motif, hoodie.) And rather than bringing video game characters into the real-world, Moschino takes real-life models into The Sims world. Moschino’s campaign features human models posing in The Sim-like backgrounds. One woman stands in a rendered poolside, wearing a Sims inspired swimsuit.

The other three models stand in a campground, posing stylishly with a log, a cell phone, and a campfire for accessories. It’s a partnership that makes sense for Moschino. Moschino’s house is well-known for its camp, wit, and playfulness. With Jeremy Scott at the brand’s helm, it delved further into pop culture moments that brought a playfulness to luxury fashion. His 2014 fall collection had models walking in McDonald’s inspired dresses, and in Spring 2015, they were wearing Barbie-inspired designs. Sims is a quintessential icon of American pop culture. It’s a game that most millennials have some sort of nostalgia for. 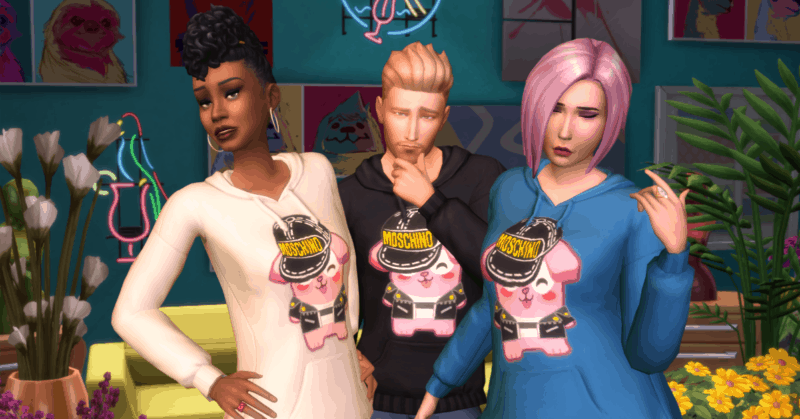 The Moschino Hoodie is available to wear in-game. Courtesy of Electronic Arts / Moschino.

After thinking about Moschino x The Sims: Gaia Online x?

Now that we’ve gone through a history trip, I’ll do a fun little hypothetical collaboration thought experiment. Gaia Online is ripe with the potential for a fashion brand collaboration. If you were an edgy nerd online in the early 2000s, you were probably on the platform. Gaia Online has a gaming component, an MMORPG called zOMG, but it’s also a social media network with active forums. When signing up, each person receives a customizable avatar. And surrounding these customizable avatars is a bustling buy, sell and trade market and Gaia Online-wide fashion activities.

In the buy, sell and trade market, people can purchase special accessories for their avatars, unique outfits, etc. Literally, a built-in Grailed exists in this platform! It’s the first place that I remember buying virtual clothing and being part of a virtual fashion community. In contrast to The Sims where clothing isn’t a large part of the gameplay for most people, clothing is very much a concern for Gaia Online. Players are doing the same thing in the Gaia Online buy, sell, and trade market as people do on Grailed. They’re trading and searching for limited-edition drops and rare items. Except, you know, instead of sneakers and streetwear items, they’re tracking down pixelated robes, crowns, and stuff. 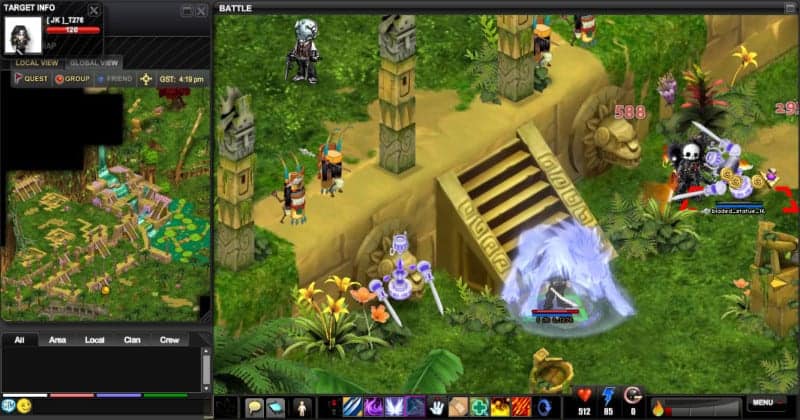 What’s Beyond Moschino x The Sims: The Future?

It will be exciting to see what the next real-life fashion brand collaboration with the game will be.  And for fashion brands using gaming technology, Tommy Hilfiger Xplore unfortunately used gaming structures for yawn-inducing purposes. However, it is an interesting idea; and with the right fashion designer, I think it has great potential. As I’ve mentioned before, truly, the Uniqlo x Monster Hunter “Mon-qlo” is the most interesting integration. In the future, it would be sick to have a collaboration where every article of clothing in real life has a meaningful in-game counterpart.

There’s something utterly fascinating about a physical item like clothing, having both a utility in real life and a virtual presence in games. Through this one item, the virtual world of a game connects to our physical reality, and vice versa. Things won’t solely exist in the virtual world or in the physical one. They’ll exist both at the same time. Pokemon Go has shown us a taste of that reality, with real geographic locations being an integral part of gameplay. Fashion collaborations with games have the potential to be another step in cementing that developing a future where reality and virtual worlds are indistinguishable.

i think about the interior lives of anime girls a lot + tech.
You might also like
Final FantasyFeatures

E3 2019 gave us a ton of new titles to be super excited about. Nintendo fans got news about ANIMAL CROSSING and LEGEND OF ZELDA, Marvel fans got a short look at MARVEL'S AVENGERS, and sci-fi nerds got more info about CYBERPUNK 2077. There was an immense amount of details that got released this week, so we break down five of the biggest game trailers that were shown.
Comments
Leave a reply